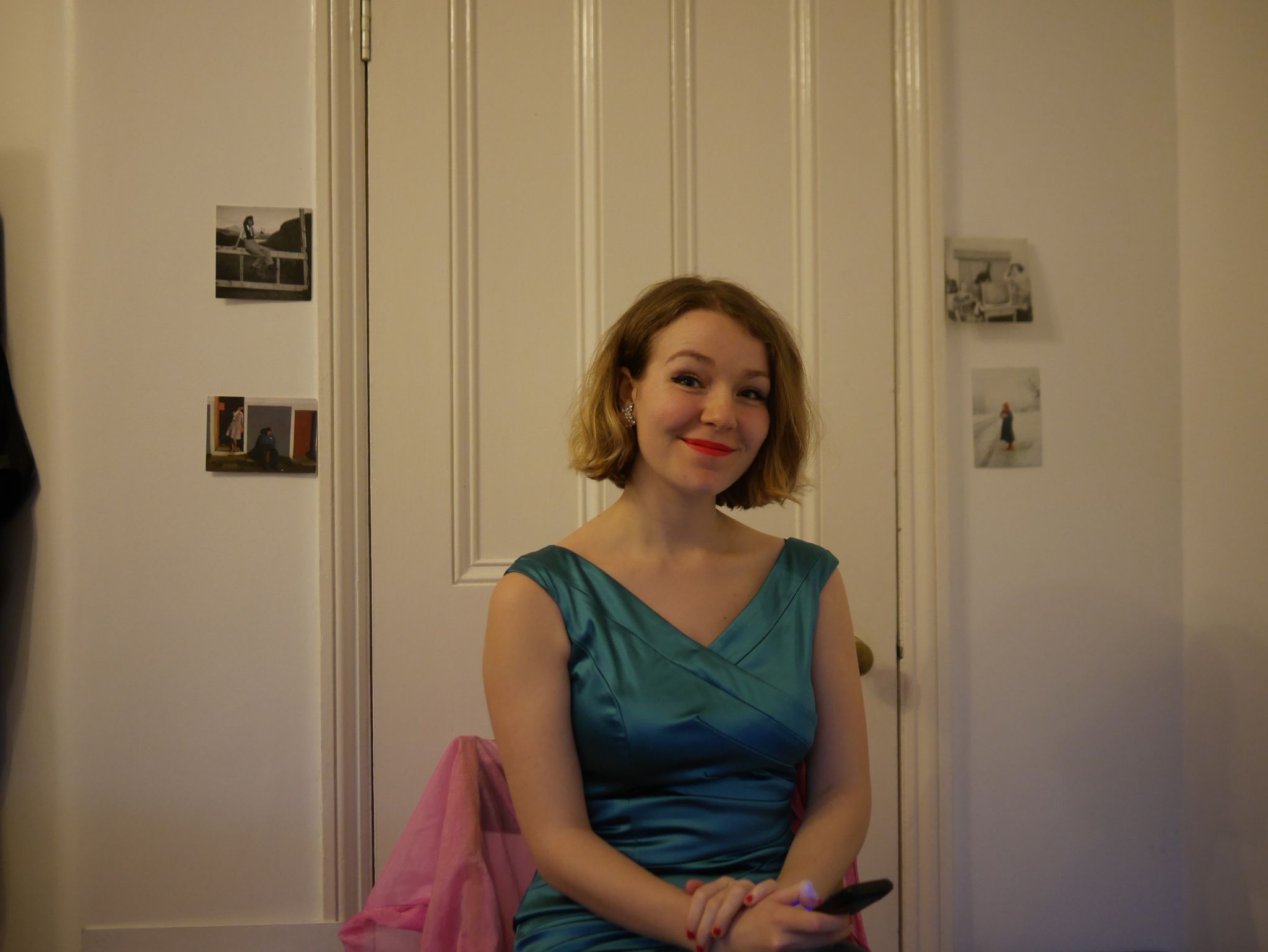 I first saw Annie Hayter from the front row of a buzzing live event for the Bedtime Stories for the End of the World project, where she wowed us with a from-memory performance of her poem 'Sealing', inspired by the legend of the selkies (see 'Something Old', below) - she describes the poem as "figuring them anew as a maritime, queer community." Since then we've discovered mutual friends as well as shared links to the brilliant Headway East London; but for all that (and all this), we've yet to meet in person. Hello 2020.

Annie won the BBC Proms Young Poet as a teenager. More recently she became a Barbican Young Poet and a London Writers Awardee - "Two communities," she tells me, "I feel blessed to be part of". Now working as a tutor and facilitator, Hayter has run workshops with the Barbican, Writerz and Scribez, Spread The Word, the previously-mentioned Headway East London and Crisis.

...and she remains a remarkable poet. This is Annie Hayter's Wedding Ritual, in her own words:

the seal women grabbed their skins, then slipped in. their mothers had told them to fear land-folk : our theft, pity, church spires...

"You can read or listen to my poem Sealing here. It’s a mini-epic about selkies – who are mythical seals who are able to remove their skins, to transforms into humans when they come to shore. In traditional stories about the selkie, whilst she is sunbathing in her human form, her seal-skin is stolen by a fisherman, who forces her to be his wife. She has children with him, but longs for saltwater again.  I’ve long been obsessed by these mythical creatures – my favourite picture-book as a child was Gillian McClure’s Selkie. The myth is a beautiful metaphor for the desire to be both – and not to be confined to one way of being. In my version of the legend, selkies are portrayed as a queer, maritime community, who fight for the return of their lost sister. Content note: this poem does feature mentions of violence and sexual violence."

"This poetry film features a piece that I originally started in 2016, after I received a travel grant to visit Iceland. The money covered three days in this beautiful country, and I crammed as much sight-seeing as I possibly could into this time, walking miles to lighthouses, cemeteries, and coves. An all-day bus tour provided me with a wealth of visions which still infuse my dreams. One figure I encountered on a placard, was Reverend Jon Steingrimmson, a priest who lived in a cave for many wintry months, and was famous for recording the tragic impact of the Laki volcanic eruption. This resulted in drought and famine in the surrounding area – eventually causing his beloved wife to starve to death.

"This poem has a peculiar resonance for me, because I used an old version in an application to join the Barbican Young Poets - a writing programme, which I was later accepted onto and has been life-changing for me. Years on, this summer, the Barbican asked me to read some poetry to accompany a screening of The Juniper Tree in their cinema, a film which delves into Icelandic mythology and witchcraft, featuring a young Bjork. This felt like a pleasing circularity. As lockdown set in, I had to send in a video instead to accompany the film on their streaming platform, and recorded this piece in my best, blue satin. So, this is an old poem, in a new, shiny dress."

"I am driven by fairy tales, so here is a trio of three purveyors of fairy tales to carry you home and haunt your waking nights, each distilling their own creation from tradition: 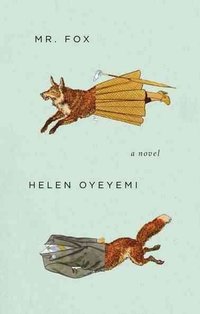 "Helen Oyeyemi’s stories always fill me with longing and awe. I think my all-time favourite novel of hers is Mr Fox, in which she explodes the Bluebeard myth, and creates a text where the muse speaks back – and plays havoc on her maker. Oyeyemi is my favourite living writer and excitingly is also from Lewisham, so it pleases me greatly to borrow her books out from the Deptford Lounge, a library which she frequented as a young writer. She wrote her first novel as a teenager, and continues to unravel mythos across her roster of works, as well as exploring wryness, queerness, race, metatextuality, and the unheimlich." 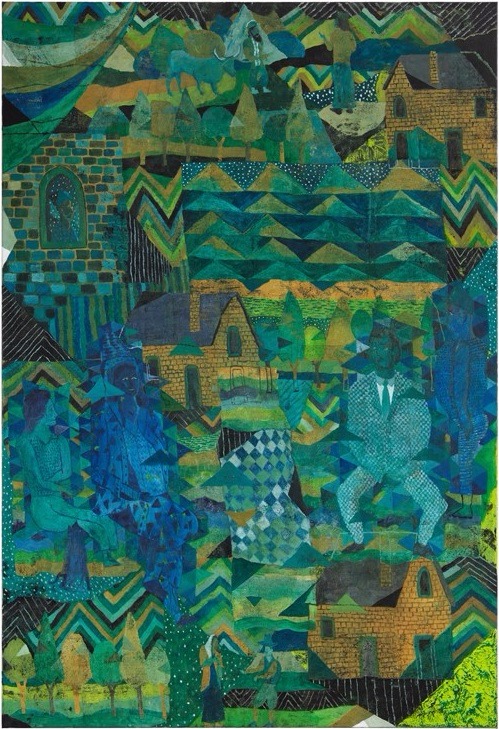 Through the Generations by Tom Anholt
featured with permission

"Much of my writing is inspired by images, so much so that I have a collection of over 100 postcards. I like that these can be carried and folded away very easily, but in array, they make me feel as if I have a portable gallery. In my poetry workshops, I always include an element of visual stimulus, and this image in particular never fails to elicit comment or wonder – Tom Anholt’s Through The Generations. This painting resembles a flooded, greening town, with cows, little brick houses and besuited humans. I relish the ambiguity of the landscape presented here."

"Finally, a song by Mirel Wagner. The Oak Tree is gorgeously creepy, and Wagner has a voice that is bell-clear, able to peel away at your superstitions, and slip into your dreaming. The video for this song is bewitching, with a little girl wandering through a forest, with huge, wondering eyes, as Wagner sings about someone succumbing to a sinister, eternal sleep under the boughs of a tree."

"I performed this poem God Birth at Jazz Verse Jukebox, a poetry and jazz night hosted by the wonderful Jumoké Fashola. This performance was my first ever professional gig, and gave me the opportunity to interact with a live band, who were improvising in response to my words. It can be so difficult to write about intimacy in a way that doesn’t feel horribly exposing, but there is a power in being vulnerable – and one that can make you feel godlike in its thrill. I liked the idea of creating a poem that explored intimacy through the language of a creation myth – and what that means in the budding stages of any relationship. Now, more than ever, I feel that gentleness is hugely important.
"For better quality audio, this poem is also featured at the end of this episode of the Logbooks podcast (27:47 - 29:04), which explores queer life in Britain as noted by volunteers at Switchboard, an organisation that runs a helpline for LGBTQIA+ callers. This series won Best New Podcast at the British Podcast Awards 2020, and I relished being part of this gorgeous podcast – being piped into people’s earphones feels so tender."
-
For more of Annie Hayter's work see her website, and for updates you can follow on Twitter, YouTube and Instagram.
-
Wedding Ritual is an ongoing series of artist profiles curated and edited by Wes Viola. For updates, follow us on Instagram, Twitter and Facebook. You can also subscribe by email. The blog is open to submissions from visual artists, sculptors, musicians, writers, dancers, sculptors, filmmakers and all kinds of creative practitioner. For more details of what's going on here, and especially if you'd like to feature yourself, check the always-popular 'what on earth is going on here?' page. For a list of every artist featured to date, see Every Ritual.
-
Wedding Ritual #18 will be conducted by Antony Hall
Labels: Annie Hayter Bjork Folklore Gillian McClure Headway East London Helen Oyeyemi Iceland Jazz Verse Jukebox Literature Mirel Wagner Mythology Poetry Selkies The Juniper Tree Tom Anholt Writing 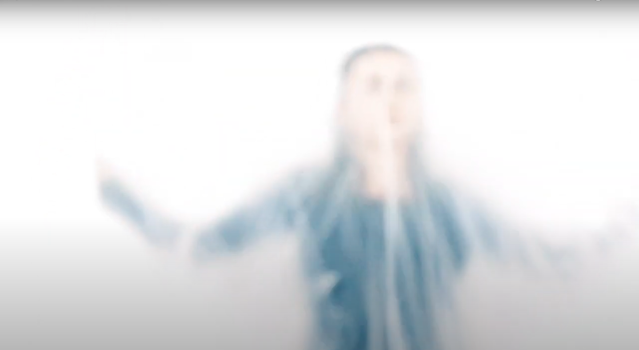 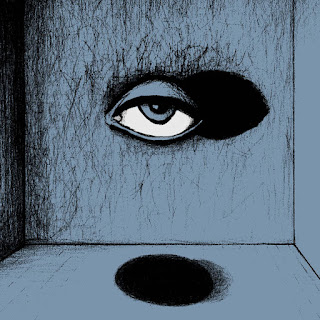 Wedding Ritual #22: NO1 of Vukovar